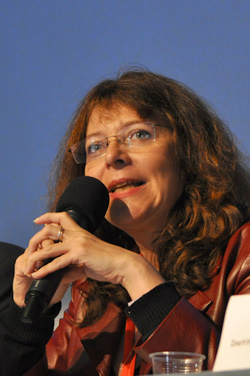 External surface contamination of manufactured vials with cytotoxics was widely published for many years (Connor et al. 2005 ; Delporte JP, et al.,1999 ; Favier B, et al. 2003 ; Mason HJ, et al. 2003)and is still an issue in 2012 according to recent papers published (Touzin et al,2008, Schierl et al., 2010, Hama et al., 2011). Vials contamination contributes to widespread contamination inside working areas within the collective protection (isolator or BSC) but also in their immediate environment. Despite implementation of corrective measures by manufacturers i.e. cleaning procedure of vials and protective overwrapping (i.e shrink wrap and plastic containers) there is still a residual risk of contamination. Cleaning procedure with washing machine is routinely used by pharmaceutical companies during manufacturing process (pharmaceutical companies’ debate, GERPAC, 2009). But it has been specified that this process is unable to remove potential contamination between flip off cap and rubber stopper. This contamination risk was previously highlighted by V’Ian Fenton-May during GERPAC, 2004. All manufacturers confirmed during the GERPAC debate in 2009, the inability of the washing process to remove the rubber stopper contamination. Moreover, it has been shown that outer packaging of vials may be contaminated as well (Hedmer et al., 2005) and when manufacturer used the same production plant, cross contamination with other cytotoxic drugs was possible as shown by Schierl et al., Hedmer et al., 2005 ; Mason et al, 2003) for cyclophosphamide & ifosfamide. The level of contamination found on vials over the different studies was unpredictable, from no contamination (under the detection limit of analytical method) and detectable contamination with large amounts up to µg scale.