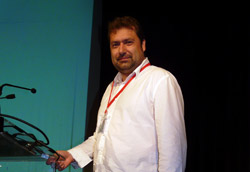 Several recent studies have demonstrated the presence of cytotoxic contamination on the outer surface of vials of anti-cancer drugs delivered to hospital pharmacies. Given that the potential impact of such contamination on the health of staff working in a centralised cytotoxin reconstitution laboratory is not well understood, policy should be guided by caution in this area. For this it is important to understand the different phenomena at the origin of the spread of this contamination.

Tinopal CBS-X, a solid, UV-fluorescent whitening agent, was chosen to be the chemical marker.

To measure the spread of contamination, glass vials intended to simulate containers of cytotoxic medicines were contaminated with an alcoholic solution of Tinopal CBS-X by spraying and drying. These test vials were introduced to the preparation process, and thus handled by the operators of the centralised cytotoxic preparation unit of the pharmacy department of Vaudois University Hospital in accordance with the procedures in force. Once the unit had finished it work for the day the contaminated sites were digitally photographed under 350nm UV light, allowing us to estimate the level of contamination. This quantitative approach was based upon analysis of the intensity and surface area of the fluorescent patches photographed, using the ImageJ software programme coupled with a ‘scoring’ technique.After identifying the phenomena which drive the spread of the contamination, corrective measures were put in place; the efficiency of these measures was subsequently tested and verified by performing the same simulation with 5 different drug preparation technicians.

This method allowed us to gather clear, qualitative results which were very useful for analytic purposes once we had identified and neutralised sources of data interference. In quantitative terms, the efficiency of the scoring method was checked in accordance with the guidelines of the French Society for Pharmaceutical Science and Practice (SFSTP). We observed that quantification was highly dependent upon the surface under consideration. Moreover, this fluorescent-based technique did not allow us to observe contamination transfer deriving from dry residues. 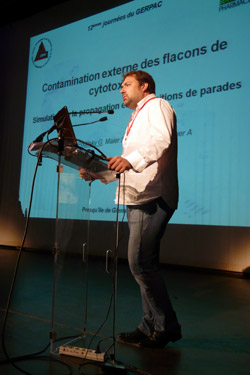 These observations compelled us to establish the following corrective measures:

Once these measures had been enforced, no further contamination was observed, neither outside the safe stations, in the air-locks or in the finished preparation. Only the smaller items of equipment, latex gloves and waste packaging (which did not leave the safe station and were intended for incineration) continued to present traces of contamination, and in significantly reduced quantities.

This quantitative, visual method using Tinopal CBS-X is easy to implement. It allows you to rapidly trace the means of contamination, and to observe the effectiveness of any corrective measures taken. It still needs improvement in terms of sensitivity and precision, particularly in terms of variation between different surfaces examined.

Thanks to these simulations, we were able to identify the paths of outer-surface contamination of cytotoxic vials and introduce simple corrective measures, which in turn allowed us to get contamination in production areas under control.