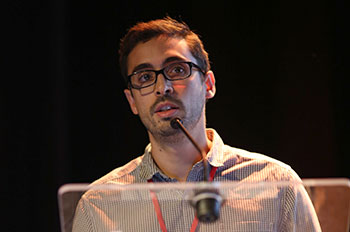 In pharmaceutical technology, the risk of occurrence of work related musculoskeletal disorders (WMSDs) among hospital technicians is high. The objectives are to identify positions at risk of WMSDs, to assess the contribution of automated syringe filling machine in reducing the occurrence of WMSDs and to give technicians ergonomic principles.

The checklist of the Occupational Safety and Health Administration (OSHA) was used to assess the risk of developing WMSDs. The risk factors evaluated are: repetitiveness, manual force, awkward posture, skin pressure, vibration, environment, and control of the rhythm of work.

OSHA grid was completed by 13 technicians performing cytotoxic preparations including 7 technicians also realizing sterile hospital preparations. The average total scores were 14.7 for hospital sterile preparations, and 12.8 for cytotoxic preparations. All total scores of the completed grids, were greater than 5, which means at risk of developing WMSDs. The risk factors which obtained the highest scores are: repetitiveness (same or similar movements performed every few seconds) and awkward postures (flexion and extension of the wrist). For hospital sterile preparations, the OSHA test was used to estimate the contribution of automated machine. With a peristaltic pump, the overall score was 9 (lower scores for repetitiveness and cutaneous pressure); and with an automated syringe filling machine, the overall score was 4 (lower scores for repetitiveness, cutaneous pressure and awkward postures).

An educational guide with prophylactic measures was developed to prevent WMSDs identified by OSHA grid. Automation of preparations led to reduced risk score, which confirms the benefits of automation in preventing the occurrence of WMSDs.