Occupational exposure and contamination to antineoplastic drugs of healthcare workers in developing countries, such as Mauritania 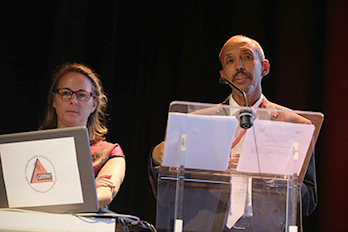 Cancer incidence is increasing worldwide. In Mauritania, through a national political will, the fight against cancer is being established gradually including the creation in 2010 of a medical establishment specializing in the cancer treatment : The National Center of Oncology (NCO). Since its opening, the number of diagnosed and treated cases of cancer has continued to increase and therefore consequently the number of administered antineoplastic drugs (6121 in 2015). This results into an increase in the workload of staff in all categories, their potential occupational exposure to these drugs and this necessitates an assessment of chemical risks associated with the handling of these drugs. These molecules belong to the list of "hazardous drugs when handling" compiled by the NIOSH because of their potential mutagenic, carcinogenic and/or toxic effect for reproduction. Collective and individual protection measures are currently in place to reduce to a minimum the risk of contamination of healthcare workers likely to be in contact with antineoplastic drugs. However, these measures need to be assessed and even strengthened. In this context, an intervention of occupational health was conducted in the NCO with the objective to determine the levels of internal contamination of healthcare workers to antineoplastic drugs which they are exposed.

The intervention took place in November 2015 at the NOC of Nouakchott, in Mauritania. Nurses (N) preparing and administering the chemotherapy and the agents in charge of hygiene (AH) from care services were invited to participate. Internal contamination was assessed using biometrology (or biological monitoring of occupational exposure) which is an essential tool for the chemical risk assessment for the Occupational Physician. Each participant completed a self-administered questionnaire and provided a urine sample at the end of a working day, the end of the week. The self-questionnaire was used to collect data on the manipulated antineoplastic drugs (type, quantity) on the tasks performed and the exposure conditions (type of collective protective equipment and the wearing of individual protective equipment). Urine samples were analyzed using specific methods with high sensitivity (UHPLC-MS/MS) suitable for the biometrology of antineoplastic drugs in occupational context. Four frequently drugs manipulated in the NOC were investigated and quantified in urine with a limit of quantification (LOQ) very low: LOQ of 2.5ng/l for cyclophosphamide (CP), ifosfamide (IF) and methotrexate (MTX) ; LOQ of 20ng/l for alpha-fluoro-beta-alanine (FBAL, metabolite of 5-fluorouracil). A subject is considered as "contaminated" since, in his urine, the concentration for at least 1 of 4 sought antineoplastic drugs has a value equal or greater than the LOQ.

In total, 12 people participated including 6 nurses and 6 AH. Twelve urine samples were collected and analyzed. The internal rate of contamination is high: 66.6% of all participants (n = 8/12), 100% for nurses (n = 6/6) and 33% for AH (n = 2/6 ). In 62.5% (n = 5/8) of cases of people with contamination, 2 to 3 antineoplastic drugs were detected in their urine. Cyclophosphamide was found in urine of all contaminated cases. FBAL was found in four workers and MTX in three. Only IF has never been detected in urine samples. Levels of urinary concentrations (all molecules) range from 3 to 844ng/l for nurse and 3 to 44 ng/l for AH. The median value of urinary concentrations were of 87 ng/l for FBAL, of 15.1 ng/l for CP and 4.4 ng/l for MTX. In the current state of knowledge, no interpretation can be made in terms of risk to the health of exposed workers. However, since the hazard of these drugs, prevention is a priority and the biological monitoring of occupational exposure to these drugs is an essentiel tool to document inefficiently controlled exposure and it povide an alarm signal. The ALARA principle (As Low As Reasonably Achievable) applies, with the aim of achieving the lowest impregnation levels, as possible. In the absence of biological value of interpretation, the results of urinary concentrations can only be compared to LQ of analytical methods that must be the lowest as possible. Interpretation is qualitative and a worker is considered to have been exposed and contaminated if antineoplastic drugs concentration of in his urine is equal to or above the LOQ. In these case, preventive measures should be reviewed.

The results of this measurement campaign confirm the existence of occupational exposure to antineoplastic drugs which is inefficiently controlled. They demonstrate the need to sensitize workers to the risks associated with handling of these drugs and the importance of initiating discussions with them about their professional practices and working conditions. It is also essential to strengthen collective and / or individual protection measures and to set up medical monitoring taking into account the current state of scientific knowledge and best practices, and socio-economic realities of Mauritania.