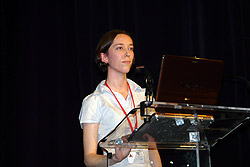 MFTs are simulations of the aseptic distribution procedure using culture mediums which allow monitors to assess the operator’s work by measuring the presence of microbiological contaminants. However, according to data in previously published research [1], the standard test does not appear to be sensitive enough to be applied to hospital pharmacy production. With this in mind we contaminated the stoppers with a quantity of 2000 colony-forming units (CFU) of Enterococcus faecalis 105/ml. The preparation technicians under observation were not aware of this contamination. At the same time an observation grid for the aseptic procedure was adapted from that given in USP <797>. 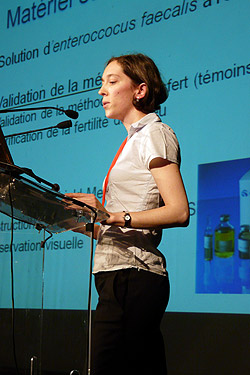 In total 15 MFTs (5 preparation technicians underwent 3 tests each over a period of 3 days) were conducted in a non-sterile zone, but following the same clothing and product handling regulations which apply in clean room production. Each MFT simulated 17 transfers between flask, pouch, phial and syringe, compared to positive and negative control samples. The resulting preparations were incubated at 35°C for 14 days.

After 14 days of incubation, with no problems observed, the pouches and flasks were checked using the contamination by filtration (0.45 µm filter) method. 3 out of the 5 technicians produced 1 result which was not satisfactory (2 CFU/filter). 74% of the requirements on the observation grid were properly fulfilled.

The principal errors observed were: failure to wash hands, presence of make-up and/or jewellery and failure to respect the decontamination procedures, particularly for stoppers. Of the 3 technicians who returned unsatisfactory results, 2 had been trained several years ago and had not undergone a performance evaluation since. The 2 technicians with fully satisfactory results were trained recently. It therefore seems necessary to regularly evaluate and, where necessary, offer further training to technicians. The more sensitive modified MFT responds to the demand for better monitoring of the performance of hospital personnel.