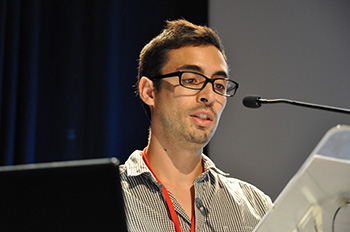 Injectable hospital preparations are compounded in the hospital pharmacy for neonates treatments. These sterile preparations are compounded in syringes closed with sterile blind hubs and packed one by one with 3 months storage between +2 and +8°C or between -25 and -15°C. The goal of our study was to evaluate sealing and suitability of syringe closure systems as long term storage devices.

Four different couples syringe-hub were tested. Syringes, filled with liquid media (tryptic soy), were capped with sterile hub. Once filled (D0) or after 3 months (M3) storage between +2 and +8°C or between -25 and -15°C, syringes with plunger and hub or just hub were immersed in an E. coli suspension and incubated for 14 days at 30°C. For each situation, 20 syringes were prepared and for total of 480.

The protocol of NHS Pharmaceutical Quality Assurance Committee was the referential for this study. The results are different to a similar study presented by A-M Beaney in 2014. However, the large percentage of syringes without bacterial growth guarantees the sealing therefore the sterility of preparations during the storage.