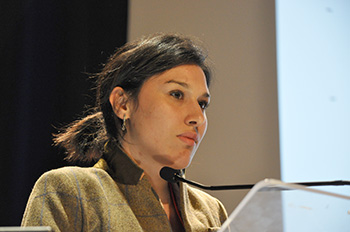 Compounding sterile medications must be carried out in controlled atmosphere areas. Many manufacturing steps can potentially break the control of air quality. The objective of the present study was to monitor the air quality during the pharmaceutical operations in presence or absence of operators and to characterize the impact of human presence on the air quality.

Two monitorings A and B were carried out after verification of aeraulic and metrological parameters. In the monitoring A, air samples in class A and B were collected continuously for five hours during all stages of preparation of parenteral nutrition in presence of three operators in class A and one operator in class B. Microbiological controls on air were carried out by sedimentation and by aerobiocollection in class A and B respectively. In monitoring B, the air quality has been characterized in presence of one operator in class A making no pharmaceutical operation. A particle counting was measured at different distances of the operator (20, 35 and 50 cm) at the head, thorax, and hip.

For monitoring A, the results of particulate and microbiological controls in A and B class have been complied throughout the activity (NF-S90-351). For monitoring B, counts particles were in compliant at the head position regardless of the distance. Non-compliant counting particles were observed at the thorax and hip (10 and 100 times greater than at the head).

The monitoring of air quality during activity is recommended in good manufacturing practice, but not in good practices of preparation. This risk analysis confirms the importance of human presence as a risk factor. A rationalization of the operators number and a safe distance between the raw materials and the operator must be considered.