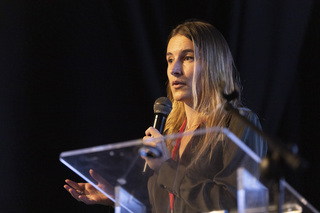 Objective In the context of essential drug shortages during the Covid-19 pandemic, we were involved in the network driven by ANSM1 for studying feasibility of hospital pharmacy production of 2% propofol injectable nanoemulsion. Objective was to find the best process to provide a physically stable sterile nanoemulsion able to reproduce the commercialized drug.

Results – Discussion Direct addition and mixing to Intralipid® 20% even combining high speed mixer and high pressure homogeneizer was not satisfactory giving droplets size above 5µm and phase separation both incompatible with IV administration. Conversely, de novo formulation characteristics were fully satisfactory with a monodisperse droplets repartition (PDI<0.2), 160 nm mean diameter, no droplet above 1µm, and negative zeta potential of -40mV. Process was optimized for a total number of 7 cycles through the HPH and initial pH adjustment above 9 was needed prior heat sterilization to obtain a final pH in the range 6-7.5. All-in-all, physical characteristics were comparable to the commercialized propofol nanoemulsions. Physical stability of the propofol nanoemulsion was confirmed at least for 1 month.

Conclusion The proof of concept showed that only de novo propofol formulation can be considered, and its transposition in hospital pharmacy requires specific high pressure homogenizer, GMP approved, allowing production in controlled environements.