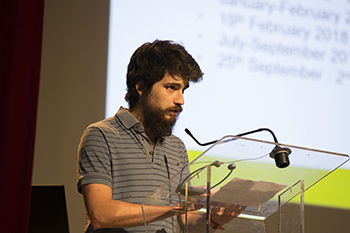 Facing a significant increase of the chemotherapy compounding activity, Clinical Pharmacy Department of Gustave Roussy will to secure the process and improve technicians working conditions led to purchase an APOTECAchemo® (Loccioni) robot. We present the qualification and first 3 months production outcomes.

Three common steps have been followed for the qualification (IQ, OQ and PQ) which allowed us to confirm the sterility of the process through Media-Fill tests campaigns, validate the continuous particle count results and check the analytical conformity when dosing the preparations. Based on identified issues, we considered initially only ready to use drugs to compound. Fo each preparation, a gravimetric control is performed on drug volume withdrawn from the corresponding vials with a video identification of the drug and a continuous environment control by particular counting.

Perfusion sets are filled with solvent and manually connected to the IV bags before automated compounding.

16 molecules are prepared on a routine setting among 20 molecules set for compounding. Progressive increase of the production (1 month ½) and the training of 4 technicians led us to implement an organization that allow us to reach a mean productivity of 14,5 preparations/h and a peak of 17,3 preparations/h, 3 655 preparations in 3 months activity and 108 preparations during one day. The average gap weight is -1,1%. Failure rate preparations is less than 1,5%.

Mean compounding duration per preparation is 3min 49sec (from 1min50sec for a low dosage to 7min20sec for high dosage with solvent withdraw needed).

Air and surfaces microbiological controls are conducted each week in the loading and preparation areas. 30 minutes are needed for the daily cleaning of the robot.

The development of an interface between the software managing the robot and the computerized prescribing software will optimize our current organization. Based on the significant added-value in terms of productivity, security and quality following the introduction of this robot, a second robot will be introduced soon.