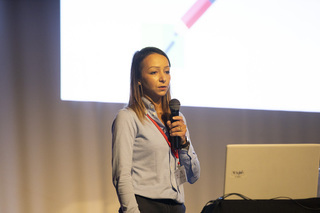 The COVID 19 health crisis showed that certain specialties essential to patient care, such as propofol, could be in global shortage. The complex emulsion formulation of this drug showed that no hospital or industrial structure was able to produce this pharmaceutical specialty. The objective of this work is to develop a ready-to-use aqueous formulation, easily achievable in hospitals but also stable in solution. This work presents the work done during the pre-formulation phase. Different cyclodextrins were analyzed as well as the cyclodextrin/propofol interaction in order to obtain the best complexation. Then, in order to allow a therapeutic use and to optimize the quantity of cyclodextrins, the impact of the addition of an excipient was studied. Finally, a pre-stability study was performed on the chosen formation. HP-βCD HPB LB was chosen in order to allow the solubilization of propofol and the realization of an injectable formulation. Anti-agglomerants such as MgSO4 or NaCl, through the formation of a drug/cyclodextrin/ion complex allowed to optimize the amount of CD and to reach an osmolarity and a pH compatible with a therapeutic use. The preliminary stability study indicated a stability of the preparation for a period of at least 2 months between 2 and 8°C in glass bottles. This pre-formulation work allowed to design a new formulation of propofol/CD compatible with a hospital manufacturing and not requiring specific equipment. However, other points remain to be evaluated in order to optimize the quantity of CD. This work will be continued in the framework of an ANR ODEFRANCE project by physical stability measurements and if the formulation and stability were validated, a pilot study should be considered and carried out in anesthesia/intensive care units.