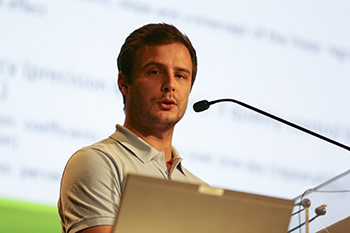 QC-Prep+ (Icônes Services, France) is an automatic analyzer combining UV and Raman spectroscopies. Currently, it has only been validated for the control of pharmacy-compounded preparations containing non-complex excipients (NaCl 0,9%, Dextrose 5%...) such as parenteral anticancer drugs. The objective of this study was to fully-validate this simple and rapid analytical method to perform the content control of preparations compounded using complex excipients, such as oral liquid dosage forms.

Oral suspension of spironolactone (5 mg/mL) was used to assess the method, using four vehicles frequently used to prepare oral liquid suspension (OraPlus/OraSweet®, Syrpend®, Syrspend Dry®, Inorpha®). These vehicles contain excipients which may interfere with the measure.The validation of the analytical method was performed in accordance to the ICH Q2 R(1) recommendations. Three calibration curves (range concentrations: 2 to 10 mg/mL) were carried-out and three quality controls (2, 5 and 10 mg/mL) were analyzed (n=3). The linearity and accuracy (trueness and precision) of the method were assessed.

This study demonstrated that the UV-Raman analytical method was suitable for the control of oral suspensions of spironolactone whatever the vehicle used.Use of QC-Prep+ for the content control of preparations compounded using complex excipients allows avoiding time-consuming methods such as HPLC. Analytic control of such preparations becomes faster.Spironolactone was assessed in this study, however this method may be apply to other drugs compounded with complex excipients. Further experiments will be performed to extend the use of QC-Prep+ to other drugs frequently compounded as oral suspension in hospital pharmacy units (dexamethasone, phenytoine, hydrochlorothiazide).