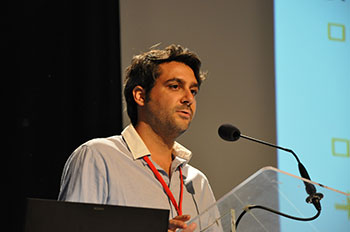 Our production unit includes different compounding system: an automaton associated with gravimetry and video recognition (20%) and manual production verified by double visual check (80%). To ensure the safety of our manual production, we implemented a dematerialized production with gravimetric control during the manufacturing process. The first step of our work was the qualification of the weighing scales in isolators, then we made a comparison to analytic control and performed a statement of non-conformity (NC).

We used the gravimetric module of Chimio® software associated with weighing scales specifically developed for this activity (Cytocontrol®). Their qualifications were performed in isolator and included different tests: fidelity, accuracy, linearity, precision and eccentricity based on OMCL recommendations [1]. A first analysis was obtained after two months of NC listing. Finally, a statistical comparison of paclitaxel bag concentrations obtained by gravimetric and analytical control (QC Prep®) of 46 preparations was performed.

Tests enabled to qualify weighing scales. 87 NC, consisted in process errors or incorrect use of the weighing scale out of 570 preparations were revealed by the NC analysis. Results of the analytical and gravimetric testing demonstrate a statistical correlation and no significant difference between both methods.

Qualification testing showed that the weighing scales were efficient in isolators. The NC analysis indicated us that the technicians need a focus on the good use of the gravimetric module and scales. The comparison between analytical and gravimetric control proved the performance of gravimetric control. The weak point remains the identification of vials during the process; we await an updated version of the software with bar codes/datamatrix recognition.