The “Radiopharmacy of errors”: a serious game to strengthen quality. 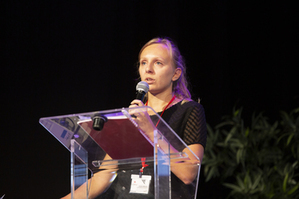 Manufacturing of radiopharmaceuticals must comply with certain quality standards and strict rules of radiation protection. Deviations from good practices and procedures are sometimes observed in current radiopharmacy practice. Therefore operator training has to be developed. Simulation is a source of innovative pedagogical developments in health care. The use of a “room of errors” constitutes a useful learning tool to reinforce the radiopharmacy technician skills and knowledge.

Materials and methods Four radiopharmacy technicians took part in real-life situations characterized by a defined number of errors. Those were set up according to the internal procedures and the risk mapping of the radiopharmacy department. Two still scenes representing the daily work in a PET-lab and a SPECT-lab were created. In each scene, several mistakes (13 and 15 respectively) could be found concerning hygiene, preparation and dispensation of the radiopharmaceuticals, quality control of the preparations, radiation protection, and transport of radioactive packages and general risk management. In addition, a moving scene was played out, consisting in the preparation of a radiopharmaceutical in the SPECT-lab. In this scene, technicians had to find 12 manipulation errors. The radiopharmacy technicians had to report every error they could find. Results were expressed as mean±sd % number of error found. A debriefing was carried out to discuss and explain each situation afterwards.

Results In the PET-lab the radiopharmacy technicians found 60±10% of the errors. For example, they have all be able to see the incorrect syringe placement, but none of them detected the prescription error or didn’t remember the rules to indicate a radioactive contamination on the floor. 75±11% of the errors was discovered in the SPECT-lab. For example, technicians found the wrong batch number of the generator in return, but did not notice the low pressure of the shielded enclosure. During the moving scene 67±11% of the manipulation errors were detected.

Conclusion This work evaluates the potential benefits of creating a “room of errors” in a high risk process such as the radiopharmacy practice. This process represents an effective way to provide an update concerning good practices and a reminder concerning critical endpoints. The impact over the long term has yet to be evaluated. Nevertheless, direct purposeful experiences close to reality are the best way to learn and retain. The development of the “Radiopharmacy of errors” in other departments could be introduced to train technicians and evaluate practices.