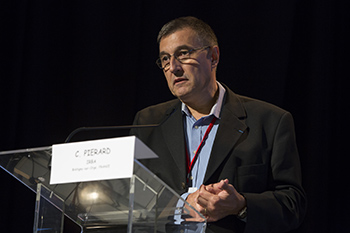 Abstract: The military chemical risk may be considered limited nowadays, due to the ratification of the Chemical Weapons Convention (CWC) by 192 countries in 1997. This convention included disarmament and control measures, and indeed almost all the stocks declared by member states have been destroyed today. On the contrary, the terrorist threat remains present, as the recent events testify. The main agents of the threat are, on the one hand, sulfur mustard (SM), used on a large scale during the First World War and particularly easy to synthesize, and, on the other hand, the neurotoxic organophosphorus agents (NOPs), such as sarin, used in the terrorist attack in the Tokyo metro in 1995.

The skin penetration of SM is rapid (a few minutes), insidious and painless. Its mechanism of action remains incompletely understood, and there is no antidote. Thus, the treatment of SM-induced cutaneous lesions is symptomatic, aiming at avoiding pain and infection. As regards NOPs (cholinesterases inhibitors, inducing a cholinergic syndrome), the emergency treatment is based on the use, at the first intoxication symptoms, of the bi-compartment auto-injector (AIBC), which is granted a marketing authorization. However, pralidoxime included in the AIBC crosses badly the hemato-encephalic barrier and is ineffective to reactivate the cholinesterases inhibited by some NOPs. Thus, many research studies are still needed. However, whether for SM or NOPs, the prior decontamination of victims is essential in order to avoid transfer contamination of rescuers and healthcare facilities.

The chemical threat is taken into account at several levels of the French state. In particular, the Civil Security is equipped with mobile cells for chemical interventions (CMIC). Moreover, there is a “White Plan” at the level of each public health institution, including a chemical risk management component in the context of a mass arrival of casualties. Finally, the means of the military health service contribute to the governmental emergency plan “Piratox”.

After a few reminders on the properties and toxicity of SM and NOPs, this presentation will review the main operational countermeasures relative to emergency resources, toxic detection, protection, decontamination and therapeutics. In the last part, some research projects carried out by the military health service will be considered.

The author declares the absence of conflict of interest.