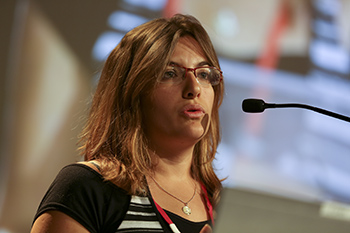 To ensure the continuity of treatment during night and week-end, the Parenteral Nutrition Department wants to set up standardized parenteral nutrition admixtures in pediatric intensive care unit. Helped with pediatricians, four formulas have been chosen. In this study, the chemical stability (CS) and the bacteriological contamination (BC) of these formulas have been investigated over 60 days.

At D0, each formula was produced thrice using an automated pumping system (ExactaMixTM 2400) under isolator. BC and CS were explored respectively using BactAlert® incubation and dosing osmolality, sodium, potassium, glucose, calcium, phosphorus, magnesium and amino acid (AA). These experiments performed at days: 0, 20, 40 and 60 of preservation at 4°C. For all parameters, variation value (∆) was calculated at each time between expected and measured value. ∆<10% was considered as non significant.

No sign of BC has been detected. A high CS of the four formulas has been also found up to 60 days of preservation. However, although total AA concentration remained stable, cystine -normally absent in the admixture- still increased where as cysteine decreased between 96% and 100%, depending on the preparation.

The results show a lack of BC and a high CS of the standardized pediatric parenteral nutrition up to 60 days except for cysteine. Cysteine concentration decrease could be linked to an oxidation into cystine byproduct during preservation. Nevertheless, this AA can be assimilated by cells, giving back cysteine. In addition, cysteine role in preterm nutrition remain uncertain anyway. Taken together, these results seem to indicate a good preservation of the four formulas at 4°C up to 60 days.