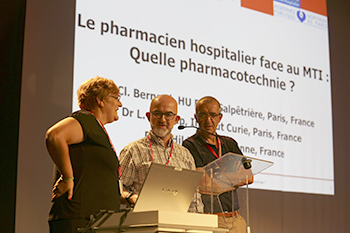 ATMPs are biological medicines for human use that are based on genes, cells or both. They offer innovative opportunities for the treatment of diseases and injuries. ATMPs are approved for different clinical uses or in clinical trials, and we are now in charge of handling it. The aim of this workshop is to think about the design of our future aseptic unit.

ATMPsThe late 1990s saw the arrival of new biological products: gene therapy products and cell therapy products. In 2003, Europe gave them the status of medicines for which the current definitions are:

GTM products shall not include vaccines against infectious diseases.

They are to be distinguished from cellular "therapy" preparations (CTP) that are not subjected to substantial manipulation and are used for the same essential function (s). CTPs fall under the scope of Directive 2004/23 / EC for "transplant" and are not pharmaceutical.

In 2007, in view of the evolution of these medicines, in particular in regenerative medicine, Europe confirms their status as medicines by adding two new types to it in the European regulation CE 1394/2007 of November for which the definitions are:

Moreover, in France, the "hospital exemption" of the European regulation CE 1394/2007 has been transcribed into a “ATMP prepared punctually” (ATMP-pp) which have specific quality standards and are used within the same Member State, in a hospital, under the exclusive professional responsibility of a physician, to carry out a prescribed medical prescription for a product specially designed for a particular patient.

How are ATMP supported ?Pharmaceutical aspect, whether under an authorization (AMM or process authorization for an ATMP-pp) or in a clinical trial, appears to be similar and may require the following means:

As the hospital pharmacist takes responsibility for this, he must have complete control of the means allocated to him: personnel, premises, equipment...

What added value in development?The development of an ATMP, pp or not, calls for:

Certainly, these regulatory aspects and techniques seem to be far removed from the "standards" of pharmacy, especially pharmaceutical technologies. However, while it will be necessary for those involved in the development of ATMP to integrate these 3 aspects into their field of competence, the hospital pharmacist is a specialist of the production of the medicinal product. In fact, he possesses the mastery of good practices, specific equipment and facilities such as controlled areas, qualification of raw materials and packaging products ... His skills and experience gives him this pharmaceutical added value inevitable to bring these future candidates medicinal products to their authorization to be made available to the patients.