Man to Mars with an artificial ecosystem 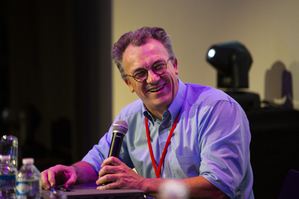 Human missions beyond Earth orbit requires high masses of human metabolic consumables (e.g. oxygen, water, food). These masses are today not compatible with the performance of the existing launchers. Due to Earth, Mars, Sun positions as well as accuracy of landing and safety, it is not possible to consider regular re-supply. Therefore, only two alternatives exist: