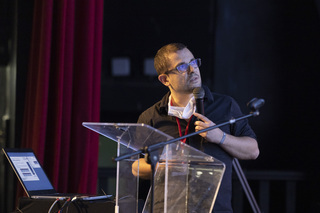 Context To produce batches of three hundred capsules, the hospital pharmacy department has acquired a high shear mixer for dry powders (Picomix®). The use of this automatic device should overcome interindividual variability that can influence the quality of the powder mixture, especially for low doses.

Objective The objective of this work was to determine the optimal parameters for the use of Picomix® to achieve a homogeneous mixture of amiodarone and lactose powders allowing the production of three hundred 5 mg amiodarone capsules.

Material and methods For this study, a full factorial experimental design with two variables (X1 = mixing time, X2 = rotation speed) and three levels (-1, 0, and +1) was used to evaluate the influence of these variables on the mixture quality. We prepared 11 powders mixtures (including a triplicate of the central point 0.0) with Picomix® following the parameters defined in the experimental plan. Two samples were taken for each mixture, one at the center and one at the periphery of the mixing bowl, to assess its homogeneity. The amiodarone amount in the samples was determined by UHPLC.

Results The results of the assay were used to calculate the difference between the levels of amiodarone in the center and in the periphery. The response surfaces obtained showed an increase in deviation as a function of mixing time and rotation speed. This deviation varied from -0.044 to -0.006 at 2825 rpm, and from -0.051 to 0.022 at 1000 rpm. The smallest deviation (-0.014) associated with the shortest time (30s) was observed at 1912 rpm.

Conclusion This work led to the study of the mixing time and the rotation speed of Picomix® influence on the amiodarone and lactose powders mixing efficiency. Different combinations of speed and time were needed to observe the smallest variations in the mixture between the periphery and the center. As a result, we chose a setting of the Picomix® with a short mixing time (30s) and an average rotation speed (1912 rpm) to obtain a homogeneous powders mixture. Determining the optimal parameters for the use of Picomix® for the preparation of active ingredients mixtures could permit to fully integrate its use into the daily activities of the pharmacy department.