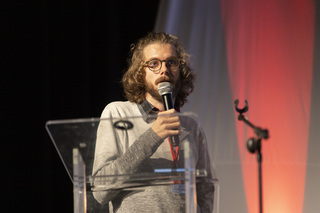 Introduction The aim of this work is to study the factors influencing the kinetics of degradation (KD) of amoxicillin (AMX) and clavulanate (CLAV) in solution to model their instability. This study is seen as an example of a systematic study and modelling of drug instability in mixtures.

Methods A stability-indicating method for the coupled determination of AMX and CLAV was developed by HPLC-DAD/MS Experiments were performed with the single molecules AMX 1600 and 800µg/mL, CLAV 160 and 320µg/mL and combined at the same concentrations. The samples were incubated at 3 temperatures (5.8, 30 and 40°C) and 2 pH values (3.5 and 9) and assayed at least 5 different times.

After graphical determination of the KD order and calculation of the rate constant (RC) at several temperatures, the activation energy (AE) and the frequency factor could be calculated using Arrhenius’ law. The AE allowed us to calculate the RC at unexperienced temperatures.

Results The identification of the degradation products by MS allowed us to specify the reactions involved. The degradation of AMX and CLAV follow a first order kinetic of the type: C(t) = C0.e-ket except for the KD of AMX in the presence of CLAV which follows a particular law of type : C(t) = A.e-α.t+B.e-βt. With C(t): concentration versus time, C0 initial concentration, ke rate constant, α RC in the presence of CLAV and β RC in the absence of CLAV and t time.

A first-order kinetic means that the RC of a single substance does not vary with C0. Table 1 shows the effect of pH on RC.

Discussion-Conclusion There is an influence between KD of CLAV and AMX. Indeed, RC of CLAV is lower in presence of AMX but RC of AMX is higher in presence of CLAV. Moreover, this phenomenon is concentration dependent. Thus the hydrolysis of AMX is catalysed by CLAV, which decreases the degradation of CLAV. CLAV degrades faster than AMX, this catalysis only occurs at the beginning of the experiment, therefore, when CLAV is totally degraded, the KD of AMX resumes first order kinetics with a β very close to the DRC obtained with AMX alone

This study has allowed us to identify the criteria for varying the KD of compounds, and thus to model the instability of these molecules in solution. This constitutes the first step towards predicting the duration of stability without complete stability studies. This work will be completed by a study in suspension which will make it possible to compare the degradation profiles according to the physical form of the active pharmaceutical ingredient and to complete our instability model.