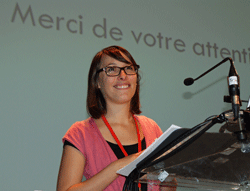 The standardisation of doses of cytotoxics has been progressively implemented since January with the help of a new module of the prescription software Chimio®, enabling the medical prescription of standard doses. Mass, in advance production started with docetaxel, followed by vinorelbin, epirubicin, cyclophosphamide and 5FU. Trastuzumab and paclitaxel are prescribed in standard doses but not yet prepared in advance.

The aim of this work was to evidence the various stages of the implementation of this activity in terms of organisation of production and to assess the time saving in making the preparations available. The standard doses to be produced were chosen by consensus between the team of pharmacists and doctors after analysis of production over a 2-year period. The frequency of production depends on the stabilities and the weekly work load. Doses are prepared in advance in a dedicated isolator by a dedicated team of dispensers. A schedule is defined each week (one day per INN) and adjusted according to the personnel, the patients expected and the number of standard preparations left. The series are produced, entered as stock in the software and chosen upon the print-out of the production sheet.

Implementation of dose standardisation requires reorganisation of the production system but enabling an appreciable time saving for patients in the day hospital (the previous time on average was 1h15 (0-2h). It enables quality compounding and a smoothing of the peaks of activity. The next stage will be the automation of these series enabling the integration of the other INN which is currently difficult.