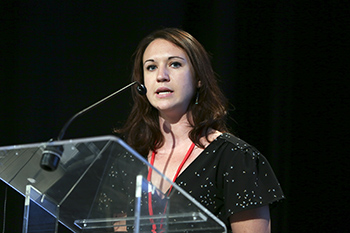 Centralisation of injectable cytotoxic preparation limits exposure of manipulators and environment to anticancer agents. Two processes are used to smooth our activity: magistral preparation (MP) and hospital preparation (HP) through campaigns in a dedicated isolator.

A prospective study over eight days has been completed. Isolator, release and assignment benches (Inside Controlled Athmosphere area (ZAC)), and delivery area and control laboratory (Outside ZAC), were chosen as critical locations. For each, 3 sampling areas have undergone standardized wiping using 2 swabs at a distance from the biocleaning, after production. A compendium (number of preparations, reflecting the activity), is carried out. Sixteen cytotoxics are subjected to dosage by LC-MSMS after desorption of the wipes. This includes cyclophosphamide (CPM), gemcitabine (GMC) and doxorubicine (DOXO) were HP.

HP campaigns are more risky processes but contamination remains confined within the isolator. The weak contamination found for DOXO can be explained by its coloring which creates awareness of the cleaning process. Non-ZAC areas have the same levels of contamination. A review of the procedures for cleaning the isolator after an HP campaign, or the frequency of replacement of gloves during a campaign is required.