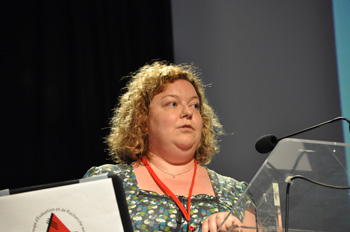 On April 2013, the pharmaceutical liberation of a trastuzumab infusion bag was rejected because a « needle » was detected during visual inspection. This translucent and glossy particle was about 1 cm long. During the same work session, three other bags (same diluent, volume and batch) presented the same defect, leading to immediate batch quarantine. An incident complaint was declared to the manufacturer and a drug safety alert was reported to National Health Department. Two days later the manufacturer sent us a microscopic-illustrated analysis of the incident: « the twisted filament found in each bag comes from a scratch generated by the needle used for drug preparation ».

We duplicate this incident in order to check out this hypothesis. We also tested another model of infusion bags which were used in our compounding unit until January 2012.

Both infusion bags models release particles when a needle scrapes walls of the injection site. Shape and size of those particles vary upon manufacturers and materials. This characteristic considerably affects detectability of this kind of incident during visual inspection controls.

This incident led us: