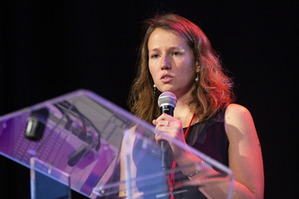 Introduction Following various incident like vial breakage, significant amounts of cytotoxic antineoplastic drugs can accumulate in the occupational environment. Thanks to the monthly monitoring of the chemical contamination of our preparation unit, we found a high contamination by cyclophosphamide (CP) following a vial breakage in the storage area, despite the application of our procedure of treating the incident and cleaning.

Objective To analyse the efficiency of a chemical decontamination procedure in the context of a massive CP contamination.

Materials and methods Contamination was measured by a liquid chromatography coupled to mass spectrometry method, locally developed. For the CP, the dosage ranges between 1 and 2000 ng/100 cm2. Quantitative analyses were performed on surface-wiped samples from the floor and the caster of the storage wardrobe on which the vial broke on D16, D44, D65, D72, D106 and D134 and on D65, D72, D106 and D134, respectively. A mixture (80/20, v/v) of 10-2 M sodium dodecyl sulfate and 70% isopropanol (SDS/IPA) was used as a decontamination solution.

Discussion/Conclusion Classified as carcinogen by the International Agency for Research on Cancer, CP represents a real hazard in case of exposure. The ongoing monitoring in our unit allowed us to identify the inefficiency of our procedure and show the difficulty to eliminate a massive CP contamination. The SDS/IPA was chosen because it has been proven to be effective on many contaminants, including CP.1-3 It is now newly mentioned in the latest American Society of Health-System Pharmacists standards4. Although being efficient on the floor, the decontamination process appears unsuitable for the caster whose surface nature and porosity are different. This work demonstrates the importance to improve the procedure of incident management by close monitoring of the surface contamination and repeated chemical decontamination adapted to contaminants and surfaces.