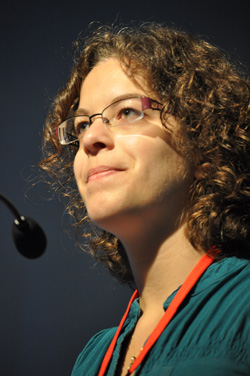 Since August 2011, the unit is equipped with portable detectors PACIII® (Dräger) as a supplement to the present detector in the sterilizer, allowing a continuous measure of the concentration in H2O2 and contributing to the protection of the personnel towards a possible exposure with this odourless and toxic gas. This work describes the organization of implementation and the analysis of the values measured over 10 months.

A meeting with the staff, the occupational medicine and the biomedical engineers was organized to define the modalities of use: allocation of a detector by manipulator, rules of port of the detector, frequency of measure of the gas (defined at 30 seconds), thresholds of the alarms according to the data (sound and visual alarms fixed to 1 ppm and 2 ppm), required attitude to hold in case of alarms, archiving of the recordings on a computing interface.

The implementation of this tool allowed highlighting a technical problem of the airlock of sterilization solved by the change of the kind of cuffs and a regulation of the flow of extraction of the air. Acute values of H2O2, upper than 1 ppm, are detected during the load and the unloading of the airlock due to the impregnation of baskets by the H2O2. The average percentage, on six manipulators, of detected values superior to zero was 1,06 % in August then decreased to reach a minimum of 0,05 % in January. The detected immediate maximal value was 2.2 ppm in May. These isolated exposures have not enough incidence when we report them in the time of exposure of 8 hours with an average value of exposure (VAE) over 10 months of 0.068 ppm with a maximum of 0.095 ppm observed for 4 months.

This means of measure, in real time, of the concentration of H2O2 in the air allows to secure to the everyday life the working conditions and to alert the personnel of a possible technical failure. However the data of the literature concerning the chronic toxicity are reduced and limit the analysis of the measured values.