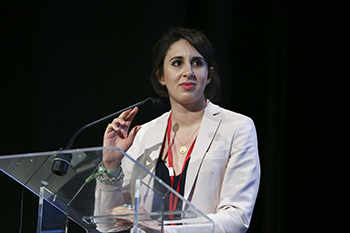 Our hospital pharmacy has two isolators and one robot (Kiro Oncology®, Kirogrifols) for the preparation of intravenous chemotherapy drugs. The aim of this study was to compare the chemical contamination generated during drug compounding using manual and robotic procedures with fluorescein.

To simulate the preparation process, fluorescein powder vials were used instead of cytotoxic drug vials. Two sets of eight preparations (bags, syringes, elastomeric pumps) were performed with 100 or 500 mg fluorescein powder vials filled with 10 or 50 ml of water for injection. Each set was repeated 3 times at 3 different days for both procedures. Manual production was performed by different operators for each set. At the end of each set, the contamination was assessed by visual inspection with UV light. In case of contamination, the area was photographed to evaluate the number and the diameter of fluorescein droplets.

For manual production, droplets were found on gloves (4 sets/6), sterile fields (4/6) and waste containers (2/6). The packaging of end products was contaminated for 16 of the 48 preparations (33%). For robot-assisted production, droplets were found on one glove (1 set/6), one syringe end-product (1/6), the working area (1/6), the waste containers (1/6) and the spikes for the filling of the vials (6/6). No packaging of end product was contaminated. Two high contaminations (2/6) of the working area (from 19 to 168 droplets) were observed. They were due to robot failures (incorrect injection in the final container).