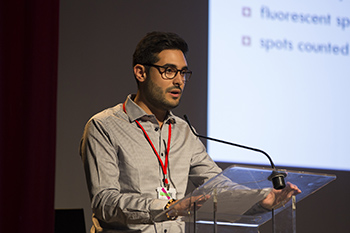 Quinine sulphate, a sensitive and non-toxic fluorescent dye was used to replace cytotoxic drugs. Evaluation included all steps of the analytical control circuit from the sample preparation inside isolator to the final analysis by High Performance Liquid Chromatography (HPLC, Dionex) or QCRx (Icônes Services). From one 5g/L quinine bag, 60 samples were performed in the same conditions. 30 plastic vials (0.5ml) dedicated to HPLC and 30 glass vials (1ml) to QCRx. Each step was observed through an UV lamp to reveal quinine fluorescence and spots were counted (semi quantitative scale).

This work pointed out that analytical control can represent a source of chemical contamination for both operator and environment. To not disrupt the routine production, this work was performed apart from opening hours of the sterile production unit. The lower work flow induced could underestimate the level of contamination compared to routine production. It was not possible by this simulated method to determine if one of HPLC or QCRx was more at risk. However, it justifies our individual protection measures (i.e. use of disposable analytical vials and storage boxes, mandatory glove port with high frequency changes, and protection of surfaces with disposable plastic films of the computer’s keyboards). For high level of toxic drug production with high level of analytical control, dedicated containment areas should be envisioned.