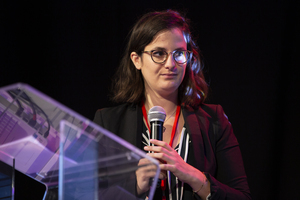 Introduction Some medical emergencies require the administration of cytotoxic drugs outside of working hours of the cytotoxic centralized production unit. The pharmacy resident may prepare sterile preparations on his own and to perform analytical control to ensure the conformity of the preparation. Despite specific training and empowerment, this sporadic activity may be particularly critical. Thus, we achieved an 18 min training video covering the main steps of the preparation of these drugs (use of Chimio® Software and practical aspects). The aim of this work was to assess the stress level of residents induced by this activity and their satisfaction with the video as a new training tool.

Materials and Methods The study was proposed to 20 pharmacy residents. 1/ Their stress level was assessed for hygiene and security rules, preparation, analytical control and simultaneous pharmacy management using visual analog scale (VAS) derived from VAS pain assessment (0 to 3 : mild stress, 4 to 6 : moderate, 7 to 10 major). 2/ After viewing the video, satisfaction was assessed by Palm et al1 questionnaire validated for six dimensions and adapted for the video. Each item was rated from 1 “Strongly disagree” to 7 “Strongly agree”.

Results A total of 16 residents responded to the stress questionnaire and 13 to the satisfaction questionnaire. The average stress level vas moderate (4.0 ± 2.9), with perceived levels that vary depending on the declarant and the step. Indeed, 81.3% of respondents identified at least one of the steps as a severe source of stress, specially preparing under isolator, use of analytical equipment and simultaneous pharmacy management. In order to reduce induced stress, a video has been developed. The satisfaction questionnaire showed a good overall satisfaction for the 13 residents (mean score of 5.5 ± 0.8) including 5 dimensions with an average score higher than 5 (compatibility, support, perceived usefulness, ease of use, user satisfaction). Although only 38.5% of respondents reported that video responds to their expectations, 69.2% state their intention to continue using it.

Discussion-Conclusion The cytotoxic preparation activity during duty nightshift appears to be a major source of stress. Training video material seems to be a relevant tool for resident training. This video could help reduce the stress load on guard. As a result of this work, the video was made available to the residents during their night-shift and a telephone relay by a senior pharmacist was organized during the preparation period to limit stress and task interruptions in order to ensure the quality of the preparations produced for patient.