Development, and physicochemical and microbiological stability studies of a nicardipine oral formulation for pediatric use 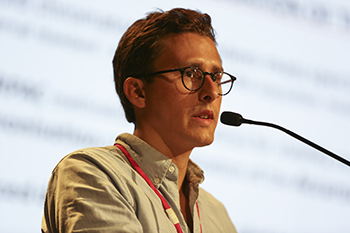 Nicardipine (NIC) is a first-line agent for the treatment of pediatric hypertension but no appropriate formulation is available. Our goal is to develop an oral liquid formulation of NIC and assess its physicochemical and microbiological stability.

The optimal formulation of an oral solution of NIC suitable for pediatric population was determined in a preliminary study. At each time point (D0, D1, D2, D7, D15, D30, D60, D90) NIC concentration was determined using LC-MS/MS method validated according to the ICH and SFSTP guidelines based on the accuracy profile. A previous forced degradation study allowed the detection of 7 degradation products. Physical stability (visual inspection, organoleptic characteristics, pH, viscosity, osmolality, density) and microbiological stability (European Pharmacopoeia) were also evaluated. Solutions were stored in brown glass bottles for up to 3 months under two different conditions (4 °C and 25 °C).

The formulated oral solution was composed of NIC at a concentration of 2mg/ml solubilized in liquid excipient Inorpha® and 1% polysorbate 80. Relative NIC concentrations were systematically superior to 90% of their initial concentration and the CVs, calculated on the remaining percentage of NIC, averages 3% and never exceed 6% (n = 9). During the 90 day study period, samples held an active pharmaceutical ingredient minimal concentration of 97.1 ± 2.65% (25 °C) and 95.8 ± 3.13% (4 °C) of initial concentration. Physical parameters remained stable during the study. Whatever the storage conditions, total aerobic microbial and total yeasts/moulds count were < 101UFC/mL and no E.coli was detected.

This new formulation was stable for at least 3 months. It is an alternative to the lack of commercial formulations adapted to children.