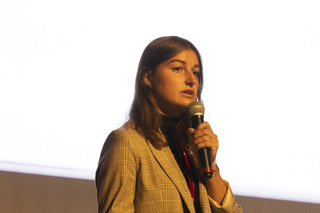 The REPEATERTM peristaltic pump is commonly used in hospital pharmacy units for the preparation of sterile drugs. According to the manufacturer, some of its components are sensitive to the action of sterilizing agents such as the peracetic acid used in our isolators. In this context, it is then necessary to adapt the practices to find a way to protect the pump, while maintaining the sterility of the preparation enclosure.

The first part of this work aimed to find an efficient protection of the pump. Biomedical wastes containers, with the same volume as the pump, were used as a model for a simulation of pump exposure. Four peracetic acid test strips with a sensitivity of 950 ppm (ANIOS) were placed on the model at same place than pump’s sensitive points (ventilation, connectors). The containers were overwrapped in single or double polyethylene bags closed with a hose clamp. They were then exposed to vapour sterilization cycles (15 and 60 min, 5% peracetic acid and 20% hydrogen peroxide) in the pass-through chamber of an isolator (JCE Biotechnology). The operations were repeated 3 times in the presence of positive (model with strips and no overwrapping) and negative controls (strip not in contact with peractic acid). In a second step, the disinfection efficiency of the pump was determined using a detergent (alcohol ethyloxylate, RTU Solution, Klercide) and a quaternary ammonium sporicide (ANIOS). Eleven samples were taken at sensitive points (keyboard, ventilation, connectors, aeration, rollers) using TSA contact agar (Oxoid) and swabs (SRK) before and after disinfection, then incubated (48 hours at 37°C and 5 days at 25°C).

The results of the tests carried out for the 15-minute vapour sterilizations, demonstrated the permeability to peracetic acid of the simple polyethylene bag overwrapping (16. 6% of peracetic strips were positive) in contrast to the double bag overwrapping (all peracetic strips were negative). These results were confirmed after 60-minute sterilization cycles. In preliminary trials, the use of TSA contact agar and swab samples highlighted areas at risk of insufficient disinfection (e.g., ventilation, connectors) for which the bio-cleaning protocol should be emphasized. Once this protocol was established, the absence of contamination of all the samples demonstrated the effectiveness of bio-cleaning of the pump inside isolator. The results were confirmed when the test was renewed in real condition with the pump transferred inside isolator.

In conclusion, this study demonstrated the necessity of a double polyethylene bag leakproof overwrapping to protect the pump from risk of exposure to vapor sterilizing agent in isolator. The adapted bio-cleaning of the pump was demonstrated and allowed to maintain the sterility of the preparation enclosure.