Carcinogens in hospitals: identification, construction of limit values and prevention of exposures 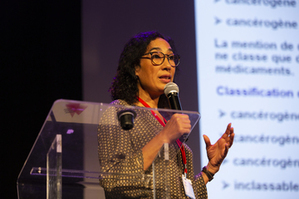 The identification of the carcinogenic hazard in companies is an essential element for chemical risks prevention: labelling, compliance with OELs and prioritization of preventive measures are the main elements to be taken into account. During this intervention, a brief reminder of the different carcinogenic classifications and their regulatory weight will be considered. Thus, the notion of threshold and no threshold carcinogen will be recalled. Non-threshold effects are defined as those occurring at any dose. The probability of occurrence increases with the dose, but the intensity of the effect does not depend on it. The hypothesis is that a single molecule of the product can cause cell alterations and cause an effect. These non-threshold effects relate to genotoxic carcinogens. Non-threshold carcinogens are reported from government and international regulatory classifications: the EU (European Union), the US-EPA (United States Environmental Protection Agency) and IARC (International agency for Research Cancer) The presence or absence of a hazard threshold for carcinogens determines the method of construction of occupational exposure limit values (OELs). OEL represents the concentration of chemical in the air that a worker can breathe for a specified period without theoretically any risk for health. The statutory definition of OEL is the same at French and European level. It is a time-weighted average limit for the concentration of hazardous chemical in the air of worker’s breathing zone during a specified reference period of 8 hours (OEL 8 hours), or 15 minutes (short-term Limit).

According to the Sumer 2010 survey, 10% of employees, i.e 2.2 million, are exposed to at least one carcinogen. Some professional sectors are at greater risk. In hospitals, identified carcinogens include night work for women, antineoplastic agents, formaldehyde, artificial UV and diesel fumes. Women are most affected by multiexposure to carcinogens The establishment of OELs is intended to limit the inhalation exposure even if repeated regularly throughout working life, being under the limit is supposed to not cause any adverse health effects on the workers. Despite this, in France, 4% to 8.5% of cancers, i.e. between 14,000 and 30,000 new cases per year, have an occupational origin. Cancer is certainly a multifactorial disease, but the weight of occupational exposures is sometimes considerable: 15% to 20% of lung cancers are thus of occupational origin. Many studies have examined the contamination by antineoplastic drugs in health care facilities. They showed that the cabinets and floors in the drug preparation area were contaminated. Detectable levels of drug contamination have also been found in areas of care where antineoplastic drugs are administered; the levels of contamination found in the literature for cyclophosphamide concentration ranged around 3.8 (µg/cm2). This suggests that existing control measures are not effective in reducing levels of contamination. In the absence of OEL for antineoplastic drugs, it is therefore important to minimize contamination and to take preventive measures