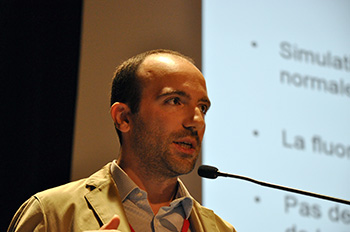 Simulation tests like the media fill test (MFT) have already demonstrated their usefulness in the field of radiopharmacy, according to the current Good Radiopharmacy Practice guidelines. Still, no specific simulation test exists to match the radiopharmaceutical preparation routine in terms of volume sampling, specific handled materials and radioprotection. We developed a simulation test of radiopharmaceutical preparations, from the eluate sampling to the syringe conditioning. Combining fluorescein to a MFT enabled the additional assessment of the operator’s ability to avoid contaminations on the working area.

A sterile fluorescein solution was added to tryptic soy broth in strict aseptic conditions to enable a final fluorescein concentration of 10 mg/mL, simulating the 99mTc eluate. Before using this solution, we confirmed the absence of microbiological contamination by incubating it 14 days. The protocol consisted in 3 phases, to simulate direct sampling from the eluate, a 1-step and a 2-step radiopharmaceutical preparation, in routine conditions (shielded class-A isolator). To validate this protocol, we prepared a positive control proving that fluorescein doesn’t influence microbiological growth. Moreover, the UV-lamp didn’t highlight any fluorescence before introducing fluorescein in the isolator. Before and right at the end of each preparation, fluorescein contamination was evaluated around the working area using an UV-lamp, and photographs were taken. Prepared units were incubated following the manufacturer’s instructions and the absence of turbidity was monitored daily. The operator’s qualification was defined by the absence of microbiological contamination at day 14. In case of any microbiological contamination, germ identification should be performed. To date, 20 simulation tests were carried out. No microbiological growth occurred. Slight fluorescein traces were observed for three operators on the working area. Though, these traces seemed to be in relation with the use of open system in our preparation process, in the absence of any commercialized closed system transfer device (CSTD) adapted to the radiopharmacy practice.

A wider use of this simulation test is already intended in two other radiopharmacies. Still, the tests we performed highlighted the contamination risks with our current preparation process. Thus, we reviewed and optimized preparation process to avoid contamination risks in the future. The necessity of CSTDs should be balanced with the quantification of this latent contamination for radioprotection matters. We intend to use this simulation protocol as an initial and periodic qualification method for the radiopharmaceutical staff.