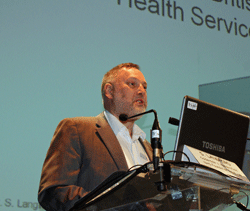 The British National Health Service (NHS) has always manufactured medicines since it was created in 1948. There is still a legacy from these times particularly in the wide variety of non-sterile traditional formulations still prepared, particularly for dermatological use.

In the intervening years medicines manufacturing has considerably developed with the advent of aseptic medicines preparation and the increasing role of the private commercial sector. It must be emphasised that the vast majority of these medicines are “unlicensed” and have not undergone the intensive product development of licensed medicines.

In 2003 the British Government invested €53million in modernising the Hospital Pharmacy Manufacturing Unit (PMU) network. This money was used to rationalise the number of small hospital based operations into a network of large lead units (13) and support units (11).

These units cover a very diverse range of activities, which include some or all of the following ;

In addition there are about 120 aseptic compounding units in British hospitals.

The current organisation is led by the National Advisory Board for NHS medicines preparation and manufacturing. This Board seeks to co-ordinate the various NHS groups involved, oversee the large manufacturing units. It also has an important role in rationalising the number of unlicensed medicines and encouraging the development of licensed medicines where the demand will support this ; which is likely to involve working with the commercial sector.

Unlicensed medicines in the UK are also provided by the private commercial companies, which have seen significant growth over the last 10 years, particularly in regard to aseptically prepared products (chemotherapy, TPN and CIVAS) and extemporaneous dispensing services to community pharmacies.

The regulation of unlicensed medicines is currently being reviewed by the Medicines and Healthcare products Regulatory Agency (MHRA). There will be greater control over what may be manufactured, enhanced requirements for stability information, pharmaco- vigilance. Additionally the current law only allows advertising of the unlicensed medicines manufacturing service, not the products ; it is likely that this will be relaxed in the light off price abuses within the supply chain.

Where the sterility test is used, it is in accordance with the British/European monographs. The main use is in the testing of batch produced sterile products, for intravenous administration, manufactured by the large NHS Pharmacy Manufacturing Units (PMU).

However there are a number of issues ;

In practice sterility testing is used as follows ;

In view of the above additional strategies to provide assurance of sterility are essential ; these include ;