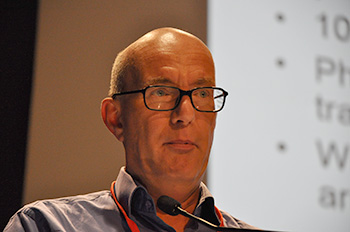 Environmental contamination with the cytostatic drugs cyclophosphamide and 5-fluorouracil was measured in hospital pharmacies in France, Switzerland and Belgium. Wipe samples were taken from one of the following positions to be selected by each of the hospitals : counter or table for prepared bags, phone horn, handle fridge, handle door exit or keyboard computer.

Each hospital pharmacy was asked to answer a short survey on number of preparations per year, what collective equipment was used and what was the immediate environment, devices used for preparation and processes used to enter drug vials and exit end-products.

The results of the French hospitals show contamination with cyclophosphamide on 9 positions ranging from 0.007 – 2.09 ng/cm2. Two of these positions were also contaminated with 5-fluorouracil (1.76 and 8.27 ng/cm2). The counter was mostly contaminated followed by the keyboard of the computer. The phone horn and the handles of the fridge and the exit door were not contaminated. In the Belgium hospitals only a keyboard of a computer was contaminated (0.19 ng/cm2). Contamination was not found in the Swiss hospitals.

33% were university hospitals, 59% general hospitals and 8% private hospitals. 54% were producing more than 10 000 preparations per year. 78% were using isolator, and among isolator users 83% were positive pressure. For BSCs users 65% were using BSCIIB, 29% BSCIIA, 8% BSCIII. Immediate environment of collective equipment were for 9% uncontrolled areas, 51% were ISO 8, 34% ISO 7 and 5% ISO 6. With regards to specific measures previously recognized to reduce the transfer of contamination outside collective protection (i.e. lack of removing the flip-off outside collective equipment ; use of containment systems for exit end-products). 47% of the hospital investigated have specific management, in particular no flip-off removing outside the protective equipment. Few hospitals (3) have implemented containment specific equipment for the vials management. 39% use containment doors for exiting end-product (i.e. DPTE, Biosafe). With regards to process of fabrication, spikes are mainly used for 66% followed by needles for 27%, few are using closed transfer systems Tevadaptor™(3) Phaseal™ (2).

No direct correlation with the equipment, environment, process can be evidenced due to the overall very few positive samples and quite low contamination levels.

These results are encouraging with regards to processes in France, Belgium and Switzerland that containment and transfers of contaminants are well managed. Nevertheless, contamination on the table-tops and keyboards can be still an issue and all preventing measures intended for reducing this contamination should be encouraged.