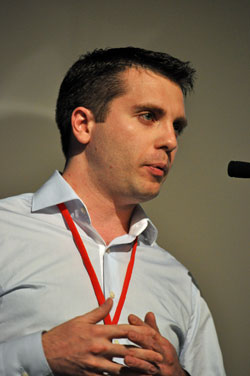 The preparation of cytostatic drugs involves the risk to get some small amounts of drugs released to the work place environment and surface contamination. Some of these drugs are known carcinogenic, mutagenic or teratogenic in humans, therefore the operator exposure should be kept as low as possible. To work with a robot could be a good option to reduce this risk in assuming that automation leads to less contamination compared to the manual preparation under a LAF.

The contamination level of 5 predetermined areas of the CytoCareTM cabinet, which during the preparation process are supposed to be contaminated by drugs, was investigated. In the first series, 15 bags of 5-FU were prepared. All the surfaces were swabbed directly after the cleaning and after the compounding. These samples were analysed by gas chromatography–mass spectrometry. 15 bags of platinum containing cytostatic drugs were prepared, and the same surfaces were swabbed by the same method. These samples were analysed by inverse voltammetry after UV-digestion [Schierl R, et al.].A second series will be prepared and in addition the surface of each bag will be also swabbed.In parallel, surface contamination during conventional preparation procedures will be studied. 15 bags of 5-FU and 15 bags of platinum containing products will be prepared, and 4 specific areas of the LAF and all bags will be swabbed.

Analysis is not finished but preliminary results suggest that there is more contamination in working with the CytoCareTM than in the manual process. Therefore the origin of contamination has to be detected and improvements are necessary to reduce potential contamination.