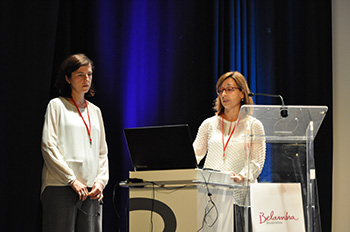 The Spanish Group of Pharmaceutical Compounding worked in the design of a quality tool that allows the classification of sterile preparations following the resolution premises. The design process included three stages: literature review, identification of risks associated to the elaboration process by means of the Failure Mode and Effect Analysis methodology, and estimation of the severity associated to the risks detected. The final model includes 6 different dimensions of risk: compounding process, route of administration, drug’s safety profile, amount prepared, distribution and susceptibility for microbiological contamination.

After initially trying a model of numeric scoring which had several problems of concordance the classification matrix was changed to an alphabetical classification, grading each criterion from A to D. Each preparation assessed is given a 6-letter combination with three possible risk levels: low, intermediate, and high. This model was easier for risk assignment, and more reproducible. An attached table proposes a microbiological beyond-use date based on risk-level, preparation environment and storing conditions, always considering physical and chemical stability

Once the risk matrix was designed, the tool was validated in order to assure its validity and reliability. The analysis included construct validity, as well as inter and intrarater reliability, assessed by unweighted Kappa coefficient (Ligh’ts Kappa). Qualitative instruments are considered reliable if overall agreement is >95% and Kappa≥0.6. A sample of 15 representative sterile preparations usually compounded at hospital settings was used to do this qualitative study. These were evaluated by 10 hospital pharmacists working in the compounding area. The final risk matrix showed an overall percentage of agreement of 96.7%, with Light’s kappa values between 0.68-1(lower limit of confidence interval >0.4) in dimensions 1-5. Intrarate reliability obtained also a kappa coefficient ≥0.6 for dimensions 1-5. Dimension 6, related to distribution of the preparation, showed a high homogeneity in the answers; so, kappa was not calculated.