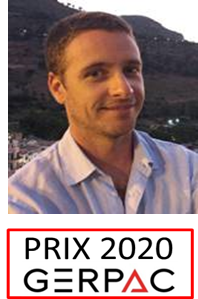 Infection is the most dramatic complication after prosthesis implantation. Here is described the case of a 58 years old man suffering for a persistent S. aureus knee prosthesis infection without prosthesis loosening, but with tibial fistula. According to medical staff, a bacteriophage-therapy against S. aureus was required to preserve the mobility of the patient. Bacteriophages had to be applied into the joint (in a liquid form), but also directly to the tibial part of the prosthesis where no cavity was available. Hence physicians required phages in a gel form.

The first step of this magistral preparation process was to determine the bacteriophages’s activity on patient’s strain. It was performed by Pherecydes-pharma (Nantes, France). DAC® (Novagenit, Mezzolombardo, Italy), a hydrogel composed of hyaluronic acid and polylactic acid was selected due to its indications in preventing peri-implants infections. It has to be reconstituted extemporaneously with water for injection. Two bacteriophages were obtained from Pherecydes-pharma in a suspension form. Since phages were not provided by a pharmaceutical company, and bacteriophage-therapy is not yet fully approved by French Health Care authorities, the patient case was reported to the French National Agency for Medicines (ANSM) for a recording of the medical practice. A cocktail of the two bacteriophages was prepared under aseptic conditions in the pharmacy department and was provided in a 5 mL syringe. To ensure bacteriophages stability, they have to be diluted in an isotonic solution (NaCl 0.9%). However, due to the instability of the hydrogel in presence of ions, the cocktail was prepared in water for injection. Bacteriophages stability within the hydrogel was previously studied(1). A test of sterility according to European Pharmacopeia (2.6.1) and an endotoxin assay (2.6.14) were performed (results were obtained a posteriori). The syringe was sent to orthopedic operating room where a pharmacist was in charge of the hydrogel reconstitution. The syringe containing the cocktail of bacteriophages was connected to DAC® syringe and the mix was performed manually. A spreader was connected to the syringe and bacteriophage-loaded hydrogel was applied directly to the prosthesis. Five days after surgery, clinical aspect of surgical site was clean, and patient returned at home.

This case demonstrates the preparation of bacteriophage-loaded hydrogel. It highlights that a cooperation among clinicians, surgeons, pharmacists, industrial companies developing bacteriophages and health authorities is required for developing such therapeutic approach. So far, bacteriophages are currently produced by pharmaceutical companies not fully approved by ANSM, and no medical device is available to load bacteriophages for a prosthesis application. Pharmacists should also take the responsibility of such preparations to overcome patient’s amputation.