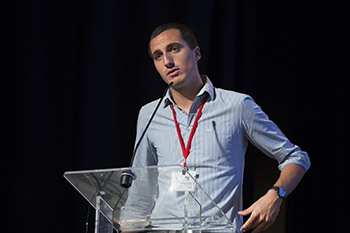 Previous studies revealed that chemical contamination is significantly reduced but not totally avoided when using robotic system [1], [2]. The aim of our study was to assess the impact of the use of worst cases formulations (i.e. vial internal pressure and special excipient formulations, including viscous and foaming) concerning chemical contamination risk using KIRO Oncology® robot.

Chemical contamination was revealed using a fluorescent dye (quinine at 1 g/l concentration) as tracer. 3 excipient formulations were specifically manufactured: viscous solution, foaming solution and aqueous solution as a control. Concerning vial internal pressure, 2 models of commercialized drugs (acyclovir Mylan® and ceftazidime Mylan®) were used for negative pressure (-950 mBar) and positive pressure (+300 mBar) respectively. The dye solution was added in reconstitution diluent bag (water for injection) to assess the whole process (vials reconstitution and solution withdrawal steps) except for aqueous and viscous ready to use solutions. 8 preparations (4 bags and 4 syringes) per condition were prepared using software corrected settings previously determined during accuracy validation. Semi-quantitative determination (number and size of fluorescent spots) was read using a UV lamp (395-410 nm) and compared to the initial picture before processing as a control.

Fluorescent spots were mainly found on work surfaces, vials adaptors and waste containers with foaming solution and positive pressure vials (Table I). Conversely, end-products were not contaminated on surfaces whatever the formulation except one time on a syringe produced from a positive pressure vial.

Qualitatively, we noticed that the reconstitution area of the robot was the utmost area contaminated with worst case formulations (foaming solution and positive pressure vials) in contrast with the very low contamination of the solution withdrawal area of the robot. This difference can be explained by the fact the robot manufacturer was able to implement corrected settings adjusted to each formulation only for dose withdrawal step but not for vials reconstitution step. Waste containers and vials adaptors also appeared contaminated with worst case formulations. However, waste containers are never handled by technician and work surfaces and vials adaptors are daily cleaned by manual cleaning followed by self-cleaning limiting transfer of contaminants outside the robot.

Table I: Semi-quantitative contamination of internal surfaces of the robot and end-products

Robotic manufacturing using KIRO Oncology® robot improves safe handling by limiting the transfer of chemical contaminants on final products delivered to nurses. Comparatively to previous studies1,2, our work highlights the need to adjust settings for the dose withdrawal step according to each pharmaceutical drug registered. Moreover, the robot manufacturer would be able to still improve residual risk for chemical contamination of surfaces inside the robot by implementing development both mechanistic and software for the reconstitution step.