How to protect those involved in performing open abdomen hyperthermic intraoperative intraperitoneal chemotherapy against exposure to antimitotics? 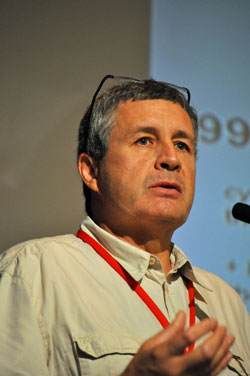 Hyperthermic Intraoperative Intraperitoneal Chemotherapies (HIIC) are conducted either with the abdomen open or not according to the choice of the team operating.The advantage of a closed abdomen HIIC is in minimising the exposure of those operating to antimitotics. The drawback is in uneven exposure of the abdominal cavity to the hyperthermic chemotherapy, with the liquid circulating between the entry and exit drains taking preferential currents.The advantage of an open abdomen HIIC (with suspension of the skin edges of the incision by threads to a frame positioned in a horizontal plane above the abdomen – Sugarbaker’s "coliseum technique") is the abdomen’s accessibility to the operator who can stir the liquid, move the viscera and uniformly expose the abdominal cavity to hyperthermic chemotherapy. The drawback lies in exposure of the surgical staff to antimitotics through the vapours released, aerosols, spillages and splashing of liquid. Contamination by the respiratory, cutaneous, digestive and ocular routes cannot be excluded. This potential risk of contamination to the staff constitutes the main obstacle to the open abdomen technique being more generally applied within surgical teams.

We designed an original "closed with belly open" [1] HIIC procedure that combines the advantages of the two previously mentioned methods without the associated disadvantages. The principle is to extend the abdominal cavity upwards and for it to be sealed by a sort of "glove box" (Landanger, France). The edges of the cutaneous incision are agraffed close up to a rubber extension mounted to rest on a special frame to which a transparent cover can be fitted. Two covers have been developed:

The operator has the choice between these two covers, the first being more ergonomic but also more costly than the second one.

Subjectively, an anonymous questionnaire put to the personnel in our operating block in writing showed a significant improvement in their sense of safety (p=0,0002), 96.5% of those questioned stating that they were reassured by the presence of this "glove box" [2].

[2] Feeling of safety of staff in relation to the hyperthermic intraperitoneal chemotherapy technique. Comparative study between an open method and semi-open method.J Chir. 2010;147:79-83