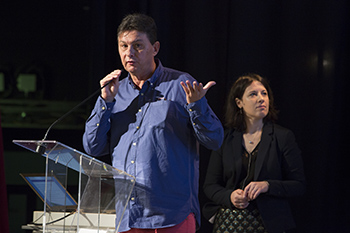 The project of automating nominative dispensation was initiated within the Hospital Territory Community Villefranche-Tarare-Trevoux in 2013. It was then carried on as part of the medical project of the Hospital Territory Groupment Rhône Nord Dombes Beaujolais (GHT RNDB) since July 2016. It represents 2747 beds for 11.4 million unit doses a year, 75% of which are oral forms. The GHT RNDB is composed of 8 establishments and 2 associated partners, the hospital Nord-Ouest of Villefranche being the main facility. Some establishments having a mutual management (Villefranche, Tarare, Trévoux, Grandris and Villars) and others with an independent management (Belleville, Beaujeu, St Cyr au Mont d’or), one of the main issues is to establish which facility is actually going to participate in this project and to determine, for each structure, a dimensioned robot according to their needs.

Our initial reflexion centered around 3 different approaches: consultations with the suppliers, the conception of a modeling tool in partnership with the Ecole des Mines from Saint-Etienne and the support of a consulting company. Identifying our needs and the different parameters such as the number of unit doses, the dosage forms, the frequency of prescriptions being changed, the consultation of over-packaging suppliers (ECO-DEX, SINTECO, SWISSLOG), allowed us to sum up the different offers, the production capacity, the space required, the robot investments, the supplies, the maintenance and logistics. It also enabled us to identify where to allocate the robots throughout the territory following the suggestions given by the suppliers according to our requirements. This last point is one of the main issues because hospital management promotes mutualisation and pharmacies promote decentralization. Consenquently, a collaboration with the students of the Ecole des Mines was established to elaborate a mathematical model, an impartial tool to help determine the most efficient solution while minimizing costs. The model is a dynamic modulable approach according to the number of establishments, the number of unit doses, the opening hours of the pharmacies and the delivery frequency between the different locations. However, it has its limits. The suppliers’ offers evolve which makes it difficult to adapt the model when the robot’s configuration changes. Furthermore, the aspect of human resources, another important issue, wasn’t part of the optimization model. Thus we contacted a consulting firm. An audit was carried out in the different pharmacies of the GHT to identify the time spent by the staff on each activity and define the reduction of time spent, the activities partially impacted, activities not impacted and the need to create new ones.

These 3 approaches allowed us to work towards an optimum solution for the GHT which would be the basis of the pharmacies specifications. The organization and the purchasing management must also be taken into account.

This project of personalized robotic dispensing in the area would centralize and increase the volume of pharmaceutical activities structured around the robot. Among the GHT, being the main facility or a smaller structure, opinions vary, depending on how the project will impact the establishment. An example of this is the centralization of the supply at only one site, making the unit doses production only at this site. Some may perceive this as a chance to develop other activities such as clinical pharmacy whereas others may fear a decrease in their influence. Cooperating with other structures with the common goal of personalized robotic dispensing involves the need to set legal status, such as a Health Care Corporation, to define regulatory aspects.

Not only does the elaboration of automated individual dispensing in the GHT requires geographical, financial, political and human resources coordination, it also meets the objectives of improving the quality of the patient care, requested by the HAS certification and the CAQES and the objective of serialization.