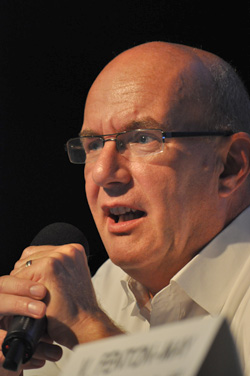 The first studies to evaluate exposure of healthcare workers to cytostatic drugs have been published around 1980 mainly based on mutagenicity in urine (Ames assay) and the presence of chromosome aberrations and sister chromatid exchanges in blood lymphocytes. Due to lack of selectivity and sensitivity, these tests became less useful as of the nineties in last century. New findings have resulted in the development of more sensitive methods for the analysis of individual cytostatic drugs or their metabolites mainly in urine.

For monitoring environmental contamination, wipe tests were developed. By taking wipe samples, contaminated surfaces can be traced and ranked according to the level of contamination. Wipe tests can be used to evaluate preparation and administration procedures, to test devices, and to check cleaning procedures.

Taking wipe samples has become very popular and nowadays many hospitals perform these tests on a frequent basis to evaluate their procedures and routines. Most hospitals see a decline of the contamination over time. The decline is not only observed for contamination but also for the amounts of drugs excreted in the urine of healthcare workers indicating a reduction of occupational exposure.

Nowadays, many hospitals take wipe samples and the question has raised frequently: does the observed contamination result in exposure of the healthcare workers and if so, what level of contamination is acceptable in terms of health risk?

Over the last 20 years, a lot of monitoring studies have been performed in The Netherlands. This has resulted in an enormous data set in general showing a reduction of environmental contamination over time. In addition, excretion of cyclophosphamide has not been found anymore indicating no measure exposure to this drug.

A few years ago, consensus was agreed on the approach how to set an acceptable level of environmental contamination. A very pragmatic approach was followed based on the marker drug cyclophosphamide. The selection of cyclophosphamide was obvious: a highly toxic drug, resistant, high skin permeability (skin exposure), frequently used and monitored (wipe and urine samples) due to sensitive analytical methods. In fact a worst-case scenario was followed (conservative approach). Based on the data set, 90% of the wipe samples show contamination levels < 0.1 ng/cm2 and 99% of the wipe samples show contamination levels < 10 ng/cm2. In addition, no positive urine samples were found at contamination levels < 0.1 ng/cm2 indicating no measurable exposure of the healthcare workers. This has resulted in the reference values 0.1 ng/cm2 (‘safe’) and 10 ng/cm2 (‘not acceptable’).

Based on these data, Dutch healthcare professionals have also agreed on different types of actions to be performed depending on the levels of contamination found after wipe sampling. In addition, these data can also be linked to cancer risk estimates in terms of strive risk level and prohibitory risk level based on the analysis of cyclophosphamide in urine of healthcare workers. In the final ‘traffic-light’ model can easily be seen what levels of cyclophosphamide regarding environmental contamination and urine excretion are acceptable or not and what actions have to be performed.

Enormous steps have been set forward to reduce occupational exposure of healthcare workers to cytostatic drugs. Awareness has grown, closed-system transfer devices have been introduced and cleaner vials have been produced. For the next decade, these developments have to be intensified resulting a further lowering of environmental contamination and consequently exposure of healthcare workers to these drugs. To follow and to support these developments, the use of monitoring methods by taking and analysing wipe and urine sample are a must and will remain a permanent tool for measuring contamination and exposure at healthcare sites.