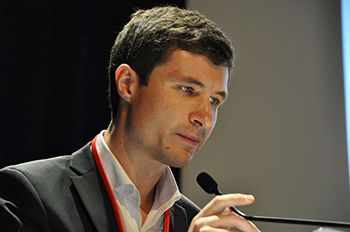 The objective of this study is to evaluate the environmental contamination in the compounding unit of cytotoxic preparation and the oncology outpatient ward, and to confront this contamination before and after implementation of new preparation and infusion closed system transfer devices. The tracer used is cyclophosphamide (CP).

The samples in the isolator were realized on the surface and tubing of the bags, vial and spike of CP, the working benchtop, the plexiglass wall surface, and neoprene gloves.

In the outpatient ward samples were collected on the drug reception area, the nursing carts, garbage carts, the ground beneath infusion stand, patients chairs and patients toilets was sampled as positive control.

An area of 20x20cm was performed for each sample except for gloves, vials and bags. An analytical LC-MS method was developed and validated with CP range from 2 to 250 ng / mL. The limit of quantification was 20 ng or 0,05ng / cm². The ANOVA and Wilcoxon tests 5% were used to analyze the results before / after.

In the compounding unit 65 samples before and 79 after devices switch were performed and in outpatient ward, 133 samples before and 134 after. In isolator, gloves are the most contaminated, then the vials and bags. Contamination of the working benchtop is more important than that described in the literature. In outpatient ward, contamination is also important on the ground, but it is contained on the rest of the infusion process. No significant difference was observed after one month of use of the new devices Vygon.

Conclusion  This study allowed us to achieve a statement of environmental contamination and exposure to antineoplastic drugs, to identify areas where corrective actions are imperative (isolator, outpatient ward ground). Non difference between before / after implementation could be explained by misusage of the Vygon new devices. These results should be verified after readjustment of practices in pharmacy and oncology departments.