RAMAN spectrum: the first step towards a simple, sample-free, non-destructive method for the verification of cytotoxic preparations? 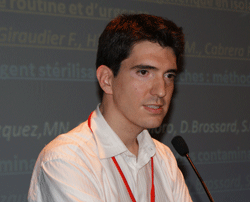 The objective was to test the feasibility of a qualitative and quantitative verification methodology of cytotoxic preparations without sampling using the Raman spectrum. The preparation and its container simply have to be placed on the reader of the appliance. There is therefore less handling and no product loss compared to the UV/visible/IR absorption spectrophotometric method developed in 2006 in our institution.

A total of 19 molecules at 3 different concentrations were tested. Ten responded and nine failed to send any signal. The platinums failed to respond and among the antibodies only bevacizumab had a signal. Apart from those 2 families, the majority of the other molecules tested responded. Epirubicin and doxorubicin have an identical spectrum. For the respondent molecules, the coefficients of correlation between the signal intensity and the calculated concentration were all above 0.98.

On its own, this method does not enable the verification of all cytotoxic preparations since certain classes of molecules fail to respond. It does not enable either the identification of all the molecules because some have superimposable spectra. By analogy with absorption spectrophotometry, which combines the UV, the visible and the IR, perhaps it should be combined with fluorescence.

As far as the quantitative analysis is concerned, the initial results are relatively encouraging with a good linearity of the signal. No account has however been taken in our measurements of the fact that the response of the signal also varies with the intensity of the laser.