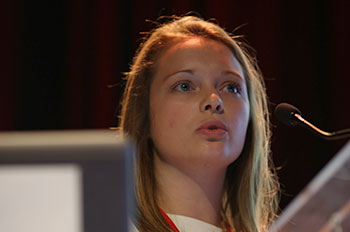 Oxidant agents used to top-decontamination, in cytotoxic reconstitution units may spread into IV solution containers. Amount of hydrogen peroxide passing through the bags and it release have been evaluated, using wrapped or unwrapped infusion bags made of three layers of polyolefin (Freeflex®, Fresenius).

3 measurement series were carried out, each one was made of 2 packages of 30 bags in polyolefin, with (package A) or without (package B) overwrapping. Each series went through a 43 minutes decontamination cycle, with H2O2 30%. Quantitative analysis was made by spectrophotometry at 562 nm, measuring a colored adduct formed by ferric iron and xylenol orange. To evaluate the release of H2O2, samples were taken att0, t1, t2, t7, t21 days. Limit of detection is around 0.08 ppm.

Calibration, made prior each analysis, was linear from 0 to 3 ppm. Concentration of H2O2 in over wrapped containers (A) was non-significantly different than 0 (p>0.05 Wilcoxon test) until 21 days. At t0 there was no significant difference between package A and B, but from day 2, H2O2 was detected in non-overwrapped bags (B) (First series, at t2 p=4, 5.10-12 Wilcoxon test). The higher concentration was reached after 21 days (0.16 ppm).