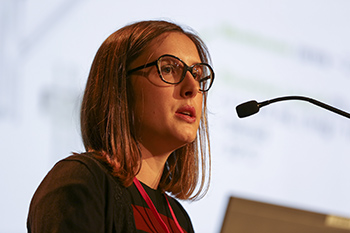 Ectopic calcifications could be treated with sodium thiosulphate (TSS) by dermal application. In a patient, with a specific formula a calcification has been cure on the lower limb but not the part on the fluteal muscle. This lack of diffusion may be solved by improving passage through the stratum corneum of the skin. The objective of this work was to improve the depth diffusion of the TSS.

The first formula has been modified by changing excipients. New pharmaceutical formulation (including gels) containing permeation enhancers have been tested, before being galenicaly characterized.The passage of TSS through the skin was determined by permeation test on Frantz cells, followed by assay by HPLC-UV in the receptor liquid, the dermis and the epidermis. This assessment has been completed by a microscopic study and the pH measurement.

Two ointments and five gels were evaluated. Concerning organoleptic features, visual aspect and spreading were satisfactory; pungent odor emitted by the TSS by degradation was not observed.The permeation test of the ointments confirmed the low level of active ingredient in the receptor fluid. On the other hand, the gels have an interesting penetration profile with a passage beyond the various skin layers. The microscopic assessment shown an homogeneity and the measured pH was appropriate for a cutaneous administration.

Results with gels were encouraging, making modulation of our formulation possible in order to increase the TSS skin penetration. After selection of the most appropriate formulation, a stability study will be carried out.