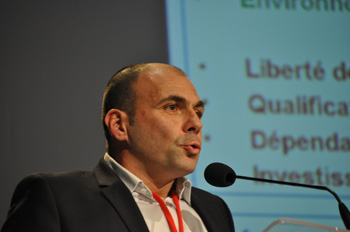 In order to allow its gene therapy products to enter in clinical development and to ensure the GMP production of future clinical batches, Genethon has created a new production facility called Genethon Bioprod which has received the authorization from the French Agency (ANSM) to become a pharmaceutical manufacturer in June 2013.

In parallel with several scientific and clinical challenges related to the development of advanced therapy medicinal products (ATMP), GMP production of viral recombinant vectors must comply with 2 types of requirements:

In this regulated pharmaceutical framework, the technological choice for aseptic filling is a critical step. The requirements linked to sterility assurance and to containment as well as to specific issues linked to gene therapy products manufacturing have been carefully analysed and have led Genethon to choose the isolator system for performing aseptic filling of viral vectors.

The isolator system presents several advantages due to the characteristics of a fully closed system (ie maintening class A specifications and drastically reducing human contamination), but some important topics like workstation ergonomy and security (use of hydrogen peroxide) have to be addressed for the implementation of such a system. The choice of the isolator supplier remains a key step for which a precise and complete identification of the industrial needs as well as benchmarking are mandatory.

Among the different challenges linked to the use of the isolator, the implementation of a parametric release replacing the sterility testing of our products is a great opportunity in the context of our production with a very limited number of filled units.

Lastly, beyond the isolator qualification and the aseptic filling validation which are relatively complex but known processes, the impact of changes linked to the implementation of an isolator system must be deeply analyzed. In this way, the personnel training, the definition of first level maintenance and flows (inside and outside of the isolator) as well as the system integration in its environment have to be considered with the greatest attention.