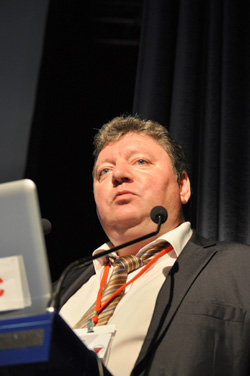 I. The efficiency of the hydrogen peroxide vapour

Evidence provided by the CEA Saclay, highlights that the efficiency of the hydrogen peroxide is at its greatest when in the vapour form (D-value decreased by a factor 10). In order to be effective, the H2O2 concentration must be superior to the air concentration in the area being decontaminated. A thin layer of hydrogen peroxide condensate is laid down on all surfaces (<0-3µ) and cannot be seen naked-eye.

Bioquell HPV generators utilises a patented ‘dual loop’ system in order to regulate the usage of hydrogen peroxide and therefore optimising the gassing cycle and reducing the cycle times to a minimum.

Hydrogen peroxide liquid (30-35% w/w) is vaporised on a hot plate and is evaporated instantly. This flash evaporated hydrogen peroxide is then distributed evenly in the area to decontaminate via a multi directional rotating nozzle. Once HPV concentration is at a maximum, condensation occurs, settling on all surfaces. At the end of the gassing cycle catalytic conversion evacuates the decontaminant from the target area, breaking down the H2O2 to a harmless water vapour and oxygen. Once the recommended occupational exposure limits (OEL) of <1ppm has been reached, it is safe to renter the area.

Bioquell versatile HPV generators are able to bio-decontaminate chambers (isolators and chambers) and rooms up to 100m3. Thanks to its unique distribution methods and remote control options, Bioquell systems are ideal for ISO 5-ISO 6 rooms and cytotoxic fume cupboards.

The Bioquell L-3 HPV generator incorporates RFID (radio frequency identification) of the sterilant, allowing full tracking of batches and used consumables. This function speeds up the decontamination process by reducing paper work and document creation where it crucial to the process.