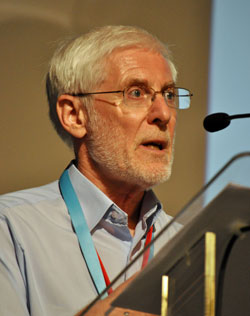 The presence of pharmaceuticals in drinking water is an issue of emerging concern. The pressure on water resources means that unplanned re-use of water by the discharge and dilution of treated wastewater into water bodies that are subsequently used as drinking water sources will be much more prevalent. While a number of studies have identified pharmaceutical residues in treated wastewater, river water and, to a lesser extent drinking water none of these has been particularly systematic. Studies in the Netherlands, UK and USA have examined the potential risks from such pharmaceuticals in drinking water and concluded that the risks are very small. However, one category of substances that still generates concern is that of chemotherapeutic agents, particularly cytotoxic drugs, because they are potentially genotoxic.

The source of such substances in water is largely through the use in and excretion by patients. There is also the potential for inappropriate disposal of unused or out of date material to sewer and this will be added to by the washings of vessels and equipment. Only a proportion of most drugs will be excreted intact so metabolism will reduce the load. Once in sewage there is the potential for breakdown in wastewater treatment while the portion which passes through treatment will be diluted and may adsorb to particulate matter in surface waters or be broken down by environmental microbiological activity. Finally in most countries, particularly in Europe, the source water will undergo further treatment for use as drinking water. The extent of this treatment will vary but some will be very advanced using technologies such as advanced oxidation and membrane and activated carbon filtration.

However, it is not just individual compounds that must be considered but groups of compounds with similar modes of action. There is potential for multiple long-term exposures to low levels of groups of substances and the risk assessment needs to consider the action, usually additive, of such mixtures.

While current estimates of risk indicate that any risks are likely to be extremely small, there are many knowledge gaps. There needs to be consideration of potentially sensitive sub-populations such as the foetus and small children that may be exposed to these low levels over a lifetime; much more systematic and comprehensive studies of actual concentrations through the managed water cycle and actual exposure of consumers through drinking water, including uptake into food through cooking; better data on which substances are biodegradable, which will be removed by natural attenuation in water bodies and which will be effectively removed by different drinking water treatment processes.

In the long-term we must seek more comprehensive and sustainable solutions but in the short-term it is important that actions are properly considered and do not deprive society of important treatments.