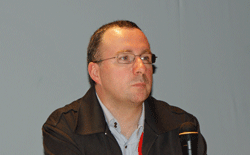 Introduction: To meet the various standards on sterile environments, the compounding of drugs and the traceability of the various phases of the drug circuit, the pharmacy department of the Sainte Justine University Hospital Centre has assessed the viability of different technologies. Barcodes and digital cameras have been integrated with the various processes. The physical rearrangement of the oncology pharmacy enabled us to revisit the operations of the sector by modifying the processes and integrating technologies.

Evaluation of needs: The consultation identified the following needs: 1) the necessity to obtain a maximum reduction and even the elimination of the presence of the pharmacist in the sterile room; 2) the wish to reduce the number of interruptions affecting the pharmacists and technical assistants; 3) the desire to reduce the number of calls from the health care units enquiring on the status of a compound; and 4) the necessity to keep a long term trace of the stages of compounding of a dose.

Evaluation of the solutions available and selection of the optimal solution: The cameras traditionally used in closed circuit television applications were set aside because of their poor resolution. PTZ (pan tilt zoom) installations were also set aside because they need the pharmacist to focus on the area to be recorded and do not reduce interruptions. Even if the equipment chosen makes it possible to record the video flow during compounding, we chose the recording of high resolution still frames to document the phases of compounding. These still frames can be consulted later for validation by the pharmacist and appendixed to the patient prescription to have complete traceability. Finally, the use of a single barcode in compliance with the GS1 standards present on the syringes makes it possible to advise the health care units that the drug is ready at the pharmacy or that it has been given to a staff member by consulting a page of the Intranet.

Detailed description of the technological solution: We had to choose a type of camera, lenses, a type of stand, a monitor for the technical assistant and a system enabling photographs to be taken. Two software packages also had to be developed, the first enabling photographs to be taken by the technical assistant and the second making it possible to advise the health care units that the drugs are ready. The pharmacological file management software package GesphaRx8 and the paper-free management software package NumeRx, already used in the department, were adopted. Digital camera : the model IQeye 702 enabling the recording of images with 2 megapixels. The camera has a POE type connection (Power over Ethernet). It is fully autonomous without any software being required for its operation, simply a connection with a navigator as from its ip address. Lenses : depending on the installations, 25 mm or 35 mm lenses were chosen to obtain an acceptable fixed focus zone. Support system for the equipment on the sterile cabinets : the Ergotron equipment and certain parts made in the hospital were necessary to fix the equipment on the sterile cabinets without having to drill into them. Monitor : A 19-inch screen enables the technical assistant to confirm the quality of the photograph taken. Image capture device : a USB pedal enables the capture of photographs without having to touch a keyboard.

Results: Since 2007, 71,408 compounding phases have been documented by the system installed. We consider that the number of interruptions has been reduced by 500 per week in the oncology unit alone. Similar gains have been achieved in the unit for the compounding on non sterile preparations. In addition to these daily gains, it is been possible to use the system to document batch numbers suspected of being the source of a wave of side effects. The system was also used to document an error in compounding that had not been detected at the time of validation by the pharmacist. Several pharmacists also appreciated the fact of being able to go back and look at a photograph at the end of a busy day. The system is now being installed in other units. The concept developed by our team is now used in several hospitals in Quebec. As for the Web interface enabling the health care unit to be updated on the status of the prescription, it has enabled a significant reduction in the number of calls from the health care units.

Conclusion: We have installed at little cost solutions making it possible to eliminate the presence of the pharmacist in the sterile room, to reduce the number of interruptions and calls and to improve traceability.